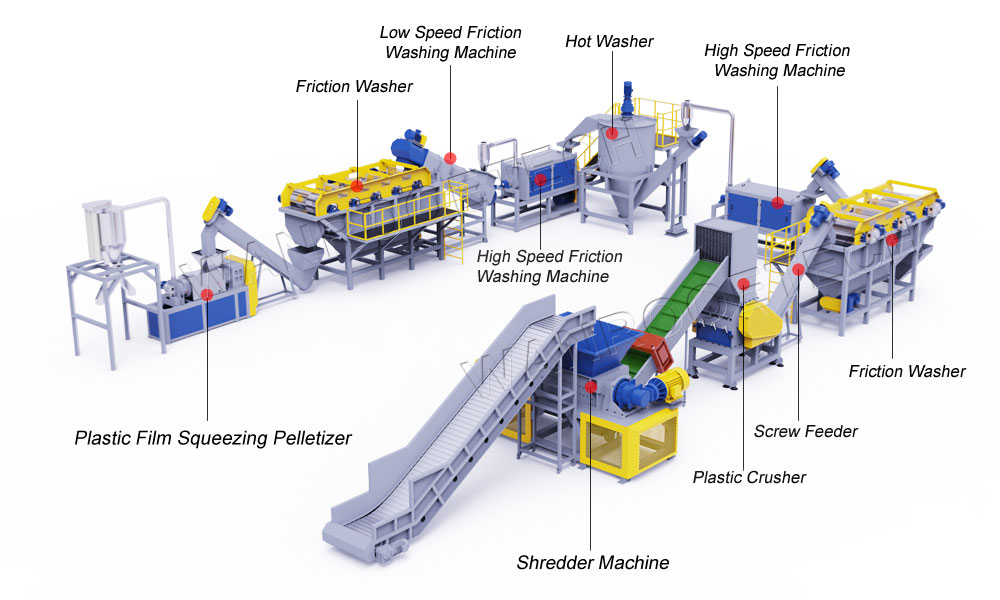 This fully automated plastic film recycling washing and pelletizing line is composed of a series of plastic recycling machines in a specific order optimized for efficiency. Our standard washing lines are available with the input capacity of 500kg/h upwards to 3,000kg/h.

While our standard PE film washing lines are sufficient for most recycling plants, custom setups with additional machinery and increased capacity can be designed for your specific needs.

Which plastic film can recycle? 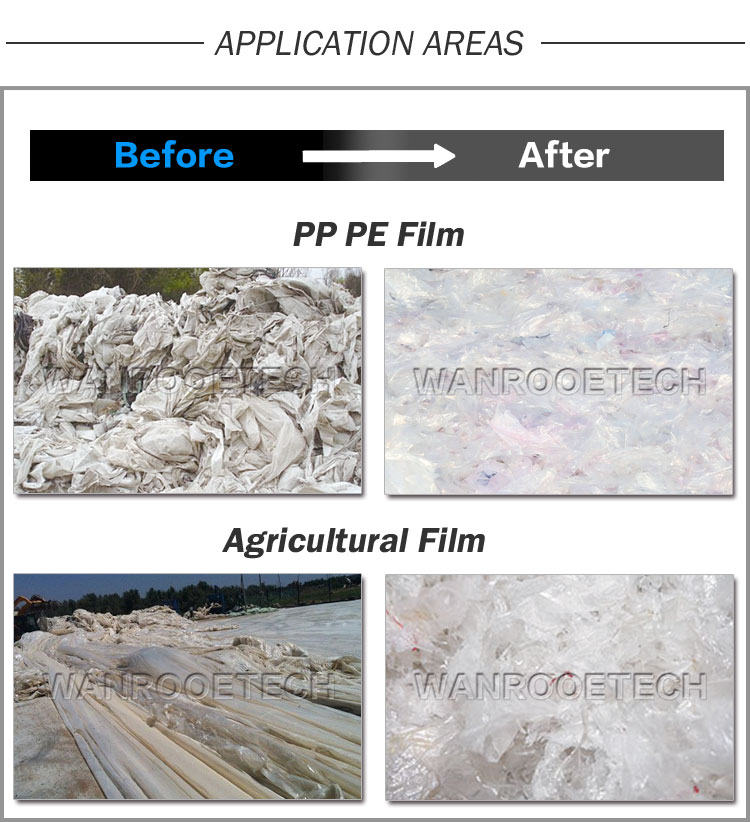 How to recycling plastic film?

As a matter of fact, most plastic film is polyethylene (PE) or polypropylene (PP) based and is suitable for recycling if cleaned of contamination. Shredding is a primary step in plastic film’s recycling process. The collected waste plastic films are firstly shredded into small pieces by a plastic film shredder and then further washed and dried. At last, the cleaned pieces is melted down and made into new products. Most waste plastic films are turned into composite lumber, but they can also be reprocessed into small pellets or post-consumer resin, which can be used to make a variety of new products like new bags, pallets, containers, crates, etc.

The entire plastic film recycling washing pelletizing line is controlled via a central electric control panel and cabinet. Each piece of equipment is connected using conveyors.

Wet Plastic Crusher: The plastic crusher cuts the plastic film into even smaller pieces approximately 10-20mm in size. With water constantly injected into the cutting chamber, our wet granulation process also “pre-treats” and partially cleans the plastic film before moving on to the next machine.

Friction Washer: A high-power washing machine, our cold water friction washers spins at nearly 1,000 rotations per minute. As the PP / PE films enter the friction washer, the plastic film rubs against each other at high speeds getting rid of hard-to-remove contamination. At the same time, any paper and cardboard is broken down into fibers and removed. While one friction washer is standard, various washing plants have requested a secondary friction washer to ensure thorough cleanliness.

Sink Float Separation Tank: Using water as a medium, materials that float are separated from materials that sink. In the case of plastic film recycling, PP and PE films will float while heavier contamination such as dirt, sand, glass, metals, and other plastics will sink. A screw conveyor at the bottom of the sink float separation tank removes the contamination. While separation is one aspect of this apparatus, a secondary function is to further clean the plastic film.

Centrifugal Dewatering Machine: The first step in the drying process, our centrifugal dewatering machine uses centrifugal force to remove a large portion of water within the plastic film before moving forward onto the thermal dryers. As thermal dryers use heat to dehydrate water, it requires more energy consumption during operation. Hence, the use of the dewatering machine is beneficial in savings for long-run operations costs.

Screw Press Dewatering Machine: An optional piece of equipment, the screw-press dewatering machine is a more advanced version of the standard dewatering machine. Instead of using centrifugal force to remove water from the plastic film, the screw press squeezes the water out via high pressure. This machine can actually take the place of both the dewatering machine and thermal dryers.

Thermal Dryer + Cyclone Separator: The clean plastic film is vacuumed out of the dewatering machine and into the thermal dryer system where it’ll travel down a series of stainless steel tubes mixing with hot air. The remaining moisture is dehydrated in this process which ends with a cyclone separator. The cyclone separator allows the plastic film to mix with a fresh stream of cold air which prepares it for storage in the product silo. The cyclone separator is also effective in removing fines and such dust.

Product Silo: A storage tank for the clean, dry pieces of plastic film.

In order to better provide you with a professional answer, when sending an inquiry, please describe your parameters or technical requirements (such as processing materials, output size, capacity, etc.), we will reply to you as soon as possible!